and interview with director Grady Hall

I would call video director Grady Hall the new Lord Of The Dance, but I fear Michael Flatley has that nickname trademarked.

Instread, I'll just say that his video for Capital Cities "Safe And Sound" is additional proof that the Motion Theory creative team is essentially without peer when it comes to creating a full world in the form of a music video. From the candy kingdom for Katy Perry to the seafaring vibes for Modest Mouse and the YouTube homage for Weezer, Motion Theory have a track record of treating each video as an intensive project that involves more r&d than you would possibly expect.

"Safe And Sound" is essentially a mash-up of 100 years of dance, integrating stock footage, recreations and more into a seamless and spirited video.  Imagine The Evolution Of Dance — one of YouTube's most popular videos — but on an epic scale and not played for laughs.

We spoke with director Grady Hall via e-mail and got some insight into the process behind the video.

Video Static: One thing well known about Motion Theory is the attention to detail. I imagine there was a lot of research done into all these different eras of dance...

Grady Hall: I've been researching this for a lot of years — but for sure, the massive stock footage search we did over here was an inspiration.  It was a refresher course in the eras and styles of dance. A pattern started to emerge where everything borrowed from what came before it, but added something big and new.

We sometimes think of the more vintage dance styles as being just ballroom, chorus line, or a bunch of women in a pool, but when you look closer, you can even see the roots of athletic B-Boys in people dancing in 1930s movies, newsreels, and stock footage.  For instance, a few years ago, I happened across the Nicolas Brothers' dance performance from the movie Stormy Weathers — and I still think it's one of the best things on YouTube.  That clip exemplifies the true-life magic that can happen when someone dedicates a lifetime to an art form.

VS: What was the scope of all the research and how were the looks for each era produced. Did you try and honor the "old ways when it came to the old footage, or was everything done with the latest technology?

GH: I laid out all of the dance styles that I wanted to capture (which was, well, as many as possible from the past 100 years), and had a couple of people start to scour through stock footage.  This was a massive search through lots of big stock libraries.  When we found a piece of killer stock footage, we'd check that box, and keep an eye out for a live-action dancer who could either "dance with" that stock footage or contrast with it.  The tough part here was that we had so many limitations on usage that we were limited to probably less than 1% of the available stock footage out there.  No movies, no well-known people, no bigger pieces . Once those obstacles started coming in, I adjusted the approach to capture more styles in camera.  Some of our best moments still come from stock footage, though.

If by "old ways," you mean did we capture the old dance styles on film cameras — no, we couldn't.  We could only shoot everything one way, and stylize it later.  But, we did honor the old ways in terms of the dancers.  A lot of our dancers were specialists in their particular styles, e.g., classically trained ballet, our whole swing dance group, obviously our B-Boy crew, etc.  Part of our mash-up philosophy was also to ask people to do their genre of dance, and then stretch over into related genres.  So we have a glimpse of a B-Boy tap dancing, for instance.

VS: You have numerous choreographed looks, numerous set-ups, numerous effects... In fact, each one individually would typically be an entire video. How complex was the process?

GH: I wish I could say this was an army, but the truth is that the entire production and post-production team was far outnumbered by the dancers.  This meant that there were far more absolutely indispensable people on the video than I've ever experienced on a project.  We turned this into our strength by getting the best of the best people out there.  The song and the concept drew people to it, and the team we got was my first choice of everyone from Mirada Creative Director Jonathan Wu and producer Buddy Enright, who were with me every step of the way, to my production colleagues like DP Shawn Kim, production designer Teri Whittaker, and my longtime 1st AD, David Goldstein.  Not to mention our wonderful-beyond-words dance dictator, Mandy Moore, editor Mike Merkwan, and a stellar team of compositors who make it look like we actually had enough time.  Take away any one of these people -- not to mention a dozen other vital contributors -- and the video would not have been the same.

One other extraordinary thing about the shoot -- and it's difficult to put into words, other than to say that there was an electricity on the set.  These dancers of different styles don't normally run across each other.  People got to see others who loved dance as much as they did, but expressed it in an entirely different way.  So when they got to dance side-by-side, or even a bit "head-to-head," it created an atmosphere where dancers throwing down bigger and bigger improvisations to top the person who just came before.  The "mash-up" that we wanted kind of started to take on a life of its own.  My hope in the video was to share a glimpse of the magic that was in that dance circle. 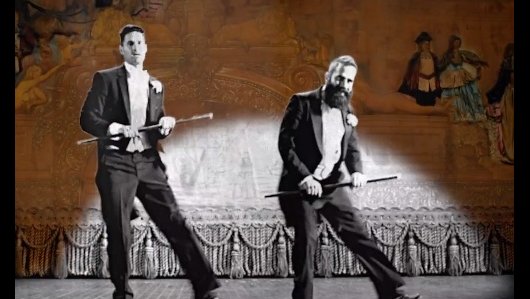