Interview and text by Stephen Pitalo, The Golden Age of Music Video -

Over twenty five years ago, hip hop godfathers Run-DMC and rock legends Aerosmith took a chance on crossover success by remaking the latter's 1970s riff-tastic hit "Walk This Way" as a hip hop record. Run-DMC's DJ, Jam Master Jay, had used the song’s guitar and drums as a beat for rapping over, but when their 1986 album Raising Hell was going to feature a remake, producer Rick Rubin brought in the Toxic Twins themselves to re-record their parts. The subsequent video had its own set of challenges, according to director (and longtime Billy Joel video collaborator) Jon Small.

Jon Small: Steve something —I can’t remember his last name — from Profile Records came down. He was also in the same building as us, and said “Hey, I love that [Whitney Houston] video. I want you to do a video. Would you like to do a video for a group named Run DMC?” and I just said, “Well, it’s not getting on the air."  He said, "Well, we’re gonna try to get ours," then I said, “Well if you can get Aerosmith in it, then you've got a shot at it." And they [Aerosmith] were dead.  There was nothing happening.  They meant nothing.  So I heard the song, and they wanted me to direct the video for some reason, so I walked up to MTV and said, “If I make this video with Run DMC and Aerosmith, would you play it?"  They went “Nope”.  (Laughter)

At that point, Billy Joel and Small had been crafting videos that addressed the dearth of diversity on MTV by featuring African American actors in Joel's videos. Small decided to portray the destruction of those barriers in a very literal sense by having Aerosmith and Run DMC play on opposite sides of a real wall, and then destroy what was keeping them apart.

Jon Small: So I'm listening to the song for maybe a half hour when I came up with the idea of the wall. We’re gonna break down the wall because the wall was, in my mind, again, MTV.  That was the wall,  that was the same wall with Billy Joel when we put the black band in his video. They wouldn’t play 'black'. That’s when I came up with the idea that the wall was not only separating the music styles, but was separating black and white, and I didn’t see any difference in black and white.  So, I wrote the idea, they bought it, and then I had to get on this [call]. I spoke to Tim Collins, who was Aerosmith’s manager, and he said, “Hey, these guys just got out of rehab.”  (Laughter) "There is just no way you, we, can do this in New York because these guys— these are heavy junkies. You gotta be out of New York." So where do we go? The heroin capital of the world — Union City, New Jersey.  (Laughter) Bad place.  So we set up this thing.  I find the location, I came up with the set, the design, the whole thing, and we’re gonna do it, and I convinced them.  I got on the phone with Steven Tyler and explained to him.  He only said one thing to me that was important.  “Please don’t make a fool out of us.”  He was really not into [it]. Don’t forget, he hasn’t stepped into the video world yet.

As the video shoot readied, a crowd shot was being set for the big finale moment when Run DMC takes over the Aerosmith concert.

Jon Small: I advertised on the radio that Aerosmith would be playing so we could get a crowd, and the black radio station, which I can‟t remember — back then Profile Records helped me get that — they made the announcement too, but when we got there at 10 o'clock, there must have been five thousand black people there. There were no white people. That's when I said "Shit, I can't do this with no white people — it's supposed to be an Aerosmith concert!" Now I'm outside walking around with my assistant director and we could see all these rockers sitting in different cars. There were hundreds of them -- they were just too scared to get out of their cars! (laughs) So, we knocked on the windows, and it took us about two hours to load all these white chicks and guys in the back door so we could fill up the first twenty five rows with white people. Meanwhile, the black guys and girls realized what was going on, so they start pounding the front door eventually breaking through the door, so we had to call the police. So, the police showed up with shotguns, stood on stage and they were trying to close us down.

Eventually, all was settled and the video was shot, and the result is a landmark clip for THE GOLDEN AGE OF MUSIC VIDEO. Check out the final result of this groundbreaking piece of music history. And it started with a little kiss -- LIKE THIS!

This piece originally appeared in slightly different form at Stephen Pitalo's The Golden Age Of Music Video, the definitive collective of '80s video interviews and more. 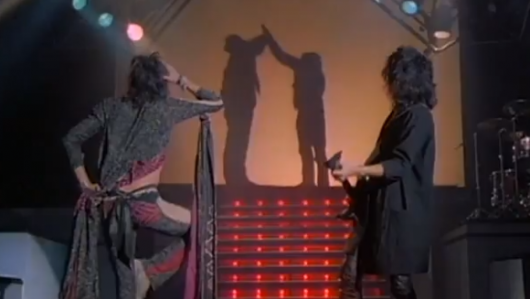 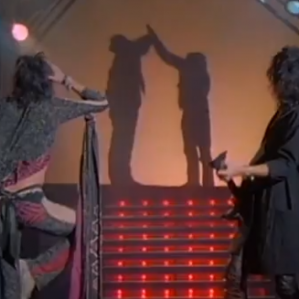