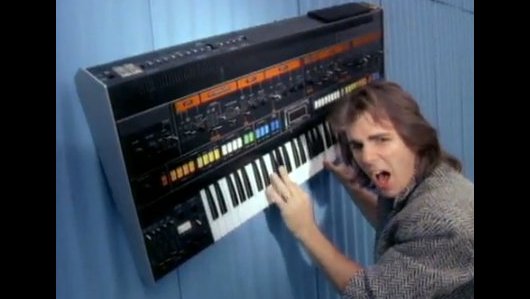 Stephen Pitalo of The Golden Age Of Music Video has been covering some of the great '80s videos for Videostatic. This week, he dives into something that was certainly successful at the time, but in hindsight was maybe not so great.

For every Golden Age  masterpiece, whether it be "Thriller" or "Like A Prayer," music video fans also endured some strangely-executed and visually perplexing videos.

The video for Journey's "Separate Ways" is one such phenomenon. This first single off their 1983 juggernaut album Frontiers was an out-and-out stadium rocker with a video that featured much of that moment's go-to images for music video: a fashionably-clothed female rebuffing the lead singer's pleading, with various band members posing for effect. These images all shot on the fly with the band fully committed to every dramatic grimace, the final product resulted in a top ten hit. In the end, it did it's job.

So why is this successful video now so humorous to watch? Why does it strike a vein with the current generation as a video so ripe for ridicule, its many parodies nearly matching the original's nearly four million views on YouTube?

Is it the overacting Steve Perry, mugging up the multi-cut closeups in his checkerboard sleeveless shirt? Is it the unexplained dockside setting? Is it the band members' unwavering seriousness during their Abba-like perpendicular profile-and-close-up shots? Is it Jonathan Cain playing a keyboard glued to a wall? Is it the band's go-for-broke airband performance, followed by actual instrument hero moments among blue barrels, forklifts and woodpiles? Is it our heroine's 1983 mall-centric fashion sense? And why did it work in 1983?

To get the backstory on this uniquely hilarious clip, THE GOLDEN AGE OF MUSIC VIDEO tracked down "Separate Ways" director Tom Buckholtz for some answers.

"I wanted a long expanse of color, which the docks provided," Buckholtz said, who recalled an unplanned challenge during shooting.

"We were shooting on the dock, and it was right after the Falkland Islands incident. A British ship had to dock in New Orleans. So they were mooring the British ship and there’s Journey, so they thought we had organized a big welcome for them. And when the British naval band came out to play for the arrival, they interrupted our video shoot, and all the people on the ship started shouting, 'We want Journey!'"

Buckholtz said he doesn't recall the overall budget, but remembers being only paid a $12,000 director's fee to complete a full trilogy of videos in only seven days.

"We had maybe a week to shoot three videos — 'Separate Ways', 'After the Fall', and 'Chain Reaction'," Buckholtz remembered. "On 'Separate Ways” there was a lot of 'let’s try this,' or 'let’s try that,' a lot of it shot on the fly. We mostly had to wing it, and back then, CBS Records only sent one person, so there was virtually no supervision."

According to Buckholtz, having an actress (local girl Margaret Olmstead) in the video perturbed Perry's girlfriend at the time. As viewers can see, Perry never embraces Olmstead, forever remembered for her white leather jacket, new-wave hairstyle, and long-legged strut across the dock.

"Having a girl on the 'Separate Ways' video was a problem," Buckholtz remembered. "His girlfriend flew in. He was a very faithful person to her, didn’t run around on her, but she could not conceive of him not thinking of her in that context, when in fact, he was."

The slow motion rock star moments edited together were designed for that song's break, so "we shot everything with a wide angle lens, and the closer you get, the more exaggerated it is. I shot about 90 percent of that hand-held, too."

When pressed on who's idea it was to have Jonathan Cain play a keyboard affixed to a wall, Buckholtz sighed, "That was me."

The director was shooting "Separate Ways" during the day and the videos for "After The Fall" and "Chain Reaction" at night, the latter two being filmed in a studio in the lower Ninth Ward. He said that sixteen-hour days were pretty much the norm, but he was also dealing with Mardi Gras parades, which constantly threw a wrench into the logistics of getting people from one location to another.

When it was suggested to Buckholtz that the conceit of certain videos is that the creators know what it means but the audience doesn’t, he laughed and said, “We weren’t that arrogant."

He also acknowledges that his inexperience at shooting videos probably contributed to the look of the video. When asked why he thinks it's such a object of ridicule, he said laughingly, "A hick director! If I had to do it over again, I wouldn’t have done it any different — well, yes I would, but my wife laughs every time it comes on TV. I’d never done one before, and maybe that shows."

He also said he embraces the attention paid to the video and the various parodies on YouTube (including one by female soldiers stationed in Iraq) as a compliment. "I like the parodies a lot," he said.

When asked what the one thing was that people asked him the most about on the “Separate Ways” video, Buckholtz replied, "You mean after they’re through laughing? People get a kick out of it, and I get a kick out of it too. It’s very flattering that something I did from the eighties is still bouncing around out there."

Check out the director's videos for Journey below... Buckholz is still based in New Orleans, and is currently working on a documentary on the Houma Indians.

A version of this article previous ran at author Stephen Pitalo's site, The Golden Age Of Music — the internet's home for authorative takes on videos from 1976 — 1993... 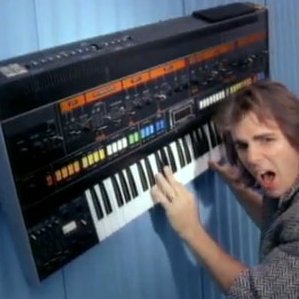