Tom Petty and the Heartbreakers "A Woman In Love" (Jim Lenahan, Dir.)

Stephen Pitalo of The Golden Age Of Music Video has been covering some of the great '80s videos for Videostatic. This week's subject is a flim noir video by Jim Lenahan for Tom Petty.

Jim Lenahan has known Tom Petty since the early seventies in Florida, when the two were young musicians; Lenahan even did a stint as singer in Petty's pre-Heartbreakers band Mudcrutch.

Lenahan's role in Petty's career switched gears, resulting in him becoming the lighting director for Tom Petty's live performances since the inception of the Heartbreakers. Lenahan eventually began shooting Petty's videos, including a beautifully crafted black and white clip for the song "A Woman In Love", which inadvertently influenced a notable Police video later on. Lenahan told us about his filmmaking beginnings and the film noir video style of "A Woman in Love".

"I was shooting stuff all the time, but it was documentary kind of stuff and then finally, people started making these music videos, or what we called little short films, and when we finally decided to do it, I remember it was right after we’d done a tour in Japan and Australia and I told the manager to let me direct and he’s going, 'Well, why should I let you direct?  You’ve never made a film before in your life' ...  And [if there's an] ideal guy to direct the film of the band, it’s the band’s lighting designer because that’s what we were doing.  What a lighting designer in a live show does and what a director does is the same thing.  We’re basically saying, 'Here’s the mood of this part of the song and here’s the thing you should be focused.  This guy who stayed in the lead, now, look at him.  Now, look at this guy over here who’s playing a guitar solo, look at him and here’s the mood change enough with the lighting, with the color, with the movement of the pacing.' It’s all the same thing.  So I convinced Petty’s manager that I should do it, and we started right after and I directed five videos.

Lenahan's cinematographer on those five videos was Daniel Pearl, one of the most prolific and sought-after directors of photography during the Golden Age of Music Video.

"Daniel Pearl shot most of the stuff I did.  And Daniel had just come off making Texas Chainsaw Massacre.  He shot that. Larry Carroll, who was the editor on Texas Chainsaw, produced some of the stuff that we did. I think he may have produced the 'You Got Lucky' video.  But anyway, Daniel shot the stuff, and we were good friends and we hung out together. We shot a few other things, and so you can tell the first video I ever directed was “Woman In Love'. And if you look at it, it’s a lighting designer making the movie because it’s chiaroscuro, it’s black and white, there’s light and shade.  That’s what it is about."

Lenahan learned about the term "film noir" by accident in a conversation with a noted 1970s filmmaker.

"I remember being over at Daniel’s house one night and [Texas Chainsaw Massacre director] Tobe Hooper was there and we were doing some tests or something for 'A Woman in Love'. We got it storyboarded out, and I was describing what we were going to do to Hooper, and he goes, 'Ah, sounds like film noir.  Why are you doing that like film noir?'  I didn’t know what film noir was.  And I said, 'Well, the song, as you listen to the music, is real dynamic and parts of it are very down, very quiet and other parts of it are very up.  The chords are very up and bright and loud and all the verses are way down, real quiet.'  And so that’s what I said, this black and white in the shades of gray, and that’s the way we’re going to shoot it.  And we shot it very film noir, if you look at it now, and I understand what he was saying at the time. It is kind of film noir."

Lenahan said that Pearl told him later that he subsequently used a similar lighting design and cinematography for  the Police's award-winning "Every Breath You Take" video.

"I was on tour and when I came back he said, 'Listen man, don’t be mad at me, but we totally ripped off 'A Woman in Love' when we shot this that.' I love 'Every Breath You Take.'  I find it beautiful."

For more coverage of classic videos, visit Stephen Pitalo's site, The Golden Age Of Music — the internet's home for authorative takes on videos from 1976 — 1993... 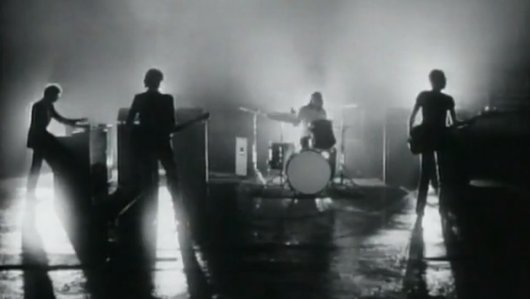 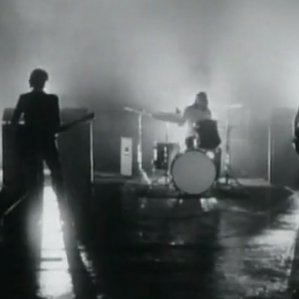