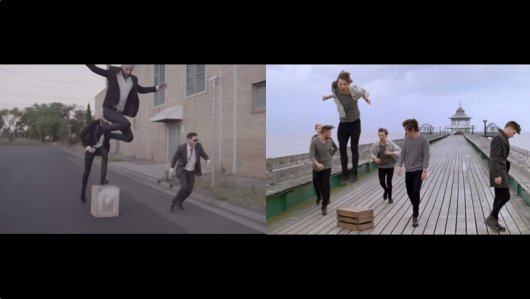 Forget about the budgets: One of the biggest challenges for any director in the Internet age is hiding your references and influences.

Some creativity happens in a vacuum — or with a vacuum, if that's what you're into — but music video has always been a borrow and steal medium, riffing off movies, fine arts, less fine arts, etc. In the pre-internet days those references were hard to detect unless the source material was super obvious (see, Flashdance v. Jennifer Lopez) or the viewer was instantly familiar with the obscure source material.

But, the unspoken rule has been that music videos shouldn't feed on its own. Music videos being influenced by other videos is usually frowned upon...

.. which brings us to One Direction and the "You Saw It" video.

I'm going to go out on a limb and assume that not a single One Direction fan had seen Clubfeet "Everything You Wanted" — but the smart folks at Australian creative house Oh Yeah Wow and director Josh Thomas knew it well; They made it. And they noticed a clear similarity to it when they saw the new One Direction "You Saw It," especially in the frozen duplicate effect used in the third act.

Oh Yeah Wow have a great little essay about it that's well-reasoned and, frankly, hard to fuck with. You can read in full at ohyeahwow.com/nodirection, but in the spirit of the Internet and music videos, I've swiped all the best bits here:

This isn’t the first time that the concept for this video has been hijacked; we have experienced plagiarism from all over the globe, including bands from Japan, Turkey, Thailand and Poland, some of which have been taken down due to so much public backlash. To be crystal clear, OYW has nothing against creative evolution. Artists constantly reinterpret other works that have inspired them and we’re fine with people taking a technique and using it to create something new- our clip for Gotye was loosely based on the genius short film Tango by Zbigniew Rybczynski, for example. The wider problem is, that plagiarism and copycatting is becoming increasingly common and acceptable. When did we, society, become so complacent as to allow this kind of behaviour to become normal practice in the media industry? It is for this very reason we have decided (this time) to rally some support- for the last thing we want is a generation of kids labelling our Clubfeet video a One Direction rip off in years to come.