Every week Videostatic looks back at a classic clip from the Golden Age... This week Golden Age Of Music Video expert Stephen Pitalo revisits "Eighties" with clip director Anthony Van Den Ende. Read On for everything you need to know about this literally face-melting video —  from dog weddings, to newsclips, punk rockers, Lebanese girls, Nazis and way more...

The utterance of the phrase “Eighties” usually serves as a catch-all for pop culture fans nostalgic for the Reagan years, but in 1984, it meant a take-no-prisoners music video that bombarded fans with their first taste of British post-punk industrial legends Killing Joke.

Stephen Pitalo: That’s a powerful video even to watch now. Did you know them before this shoot?

Anthony Van Den Ende: I remember living up in W11 and where the whole punk thing had been, and I’d managed to see loads and loads of shows. You know, during that time, I saw X-ray Spex and the Pistols, and the Clash, and everybody, and those gigs were complete mayhem. You know, chairs and glasses flying and people spitting and everything. I think that somehow, when Killing Joke arrived in my life, the extremes to which they wanted to go to, it was not really bothersome to me. Sort of, the crazier the better, really.... Jaz [Coleman] the singer, Paul Raven the bassist, Geordie [Walker] the guitarist, and “Big” Paul Ferguson the drummer all lived around Notting Hill Gate. I got a call to go to EG Records which, I think, also looked after Roxy Music. I had a meeting with the people that ran the label and Jaz came in and we hashed out this idea of performance, but Killing Joke had a list of footages, you know, really heavyweight live footage from day one — from marriages to animal experimentation — things, I suppose, that were going on in the eighties. And that film, that video clip, was Jaz’s trophy ideas that we sort of agreed upon. We put them together, and that’s how that one turned out, really. Yeah, it is heavy, a bit over the top, really. I mean, they’re good live. They’re a frightening band.

SP: Killing Joke is a fierce band, but they seem to have a sense of humor. You could see that in “Eighties” because, along with political footage in there, you have multiple shots of the dogs getting married.

AVDE: Yeah. (laugh) I think we used to meet up early in the morning and just brainstorm, and I think somebody would have the dog wedding idea. Then somebody would have the idea of burning videotapes and Beatles records being burned when Lennon made that quote about the Beatles being bigger than God, so there is all of that footage of Beatles albums being burned, and the Nazi burning books. They were four heady guys, and I think they all had their inputs, so we made a list of elements to include, and I cannot remember who suggested what, but it was embroiled like that, really. I think that the guitarist was probably the sickest of them all really. In a fun sense, I might add.

SP: You had previously shot videos for A Flock of Seagulls, but this is overtly political post-punk stuff. When your lead singer is in a suit and standing at a podium with twenty five microphones with a flag of Russia behind him, you’re really going for it. The band are all in a black box background, which in this case, made for a very sort of menacing tone. Where did you shoot that?

AVDE: It would have bene in a London soundstage/studio. There were number of them beginning to spring up then. There were warehouses that people had begun to convert.

SP: You have some scary moments in there, like the visual effect of Jaz’s face stretching out. Also, you shot each of the individual members and but never see any of them together.

AVDE: I think the stretch sort of accentuates a vocal line, or Jaz really screaming a bit like Edward Munch. When you were in the edit in those days, editors would start to experiment. Although I never really liked [the effects] that much, I thought it dated the videos. It was all just experimental. It was just a machine. It was just the technology! It began to do things in front of you that previously you had to send off to the labs to be done. [The band] would all come to the edit suite and camp out with Jack Daniels, and they were really focused. The edit suite’s always nicer when there is nobody there, just you (laugh), but all of them would be there and they really meant what they said, and there is a saying, “What it says on the tin is what it is”. I mean, they just wanted it pushed to the absolutely extreme, really. And I don’t think there was any concern about whether it would get shown, or who would show it. I think [the purpose of the video] was just to make it like a political broadcast on behalf of Killing Joke, really. I mean, it just needed to be really sharp and menacing, and that is the way they wanted it. I always remember saying to Raven once that I heard the track on the radio. “Wow, it is amazing. They are playing it on Radio 1!” Because it just sounds so heavy and it was on daytime radio when normally it’s quiet melodic pop stuff. But everybody got really defensive, saying, “But why shouldn’t they?”

SP: Yeah. It is kind of warped. I think there is one edit that exists where the guitar player has these scars on his back, like he was whipped.

AVDE: Yeah, by his girlfriend or something. Yeah, Geordie, he was quite a sick guy. I remember he liked Lebanese girls. He was forever missing endlessly, with all sorts of extraordinary women. He came up with this idea about having scratch marks and whip marks on his back. So, when he turns around, yeah, there they are, revealed. Sort of bizarre really. Now everybody has to look squeaky clean, even styling hair and makeup, but I wish it was more like then these days. And they were not real scars, that was makeup.

SP: Obviously he has got this great guitar stance, he’s wearing a priest collar, and then he turns around with the scars on his back. It’s one image pushing against another image, against another. You were able to push buttons with some very simple shots, and it really seems to get to the core of what they were about.

AVDE: I did go to see them a few times, and yeah, they really lived it. I mean, onstage, I remember they really were frightening. You really never knew when they were going to go off. What they would have done or could have done, I do not know, but just the power of their music, post punk, and that sort of level that they play — they are all very bright, and there is that other scene in Jaz’s makeup.

SP: I was going to ask you about his face melting. What happened there?

AVDE: I think he wanted to build the whole idea of Hiroshima, sort of a nuclear kind of skin-peeling moment really. They just wanted to shock. I think he wanted it even more extreme than it end up being in the video really. I am sure if we are making it now, we’d go right down to his skull.

SP: You also have footage of some punks. Was that shot at a gig? You have one shot of kids standing outside in Killing Joke jackets.

AVDE: That was done in Hammersmith. That was just shot outside a show. It would have taken place around the time we shot the video. I remember that. There was grainy black and white footage of some of their fans, milling about outside.

SP: When you shot it and it aired, it was 1984, right in the middle of the actual decade. If you watch it now, it is still enormously powerful and just a real punch in the face, but the eighties is now in the past tense. Does it mean something different to you now?

AVDE: I do not know if it means much now, really. I thought the film was a bit repetitive in a way. It was like an anthem. Killing Joke always seem to be going on and on about Nazis. I think they just tried to shock sometimes in a humorous way, and just sometimes it was just banter. I have not watched it in a while. I think it was shot nicely, and it caught them in their prime.

note: This is an edited version of a piece that previously ran on Golden Age Of Music Video. 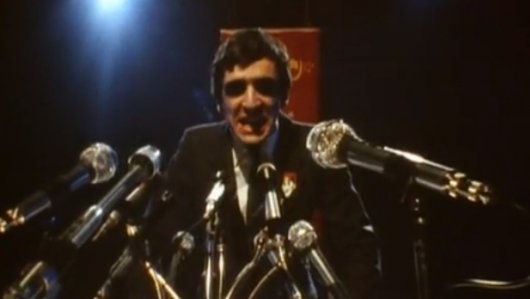 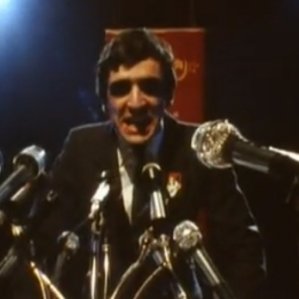