Solving the Placebo "Too Many Friends" Video with Director Saman Kesh

Placebo - Too Many Friends

Placebo "Too Many Friends" is one of those great videos that can be easily summed-up in a couple bullet-points to a newbie — it's narrated by author Bret Easton Ellis and ends with a quiz — but also stands up to repeated viewings and close studies. The video is a mystery, but also a critique about how we've been lulled into submission by our digital devices and the well-chose pharmaceutical.

We recently chatted with director Saman Kesh via email about how the video came together, the irony of it all, and what it means — including how the video is slyly, if a bit coincidentally connected to The Dark Knight Rises.

Video Static: The obvious first question (to me, at least) is how Bret Easton Ellis got involved...

Saman Kesh: Bret jumped on later in the game. I think we had already been cutting. I always thought of him actually, but the funny thing happened when Ross Levine (Exec Producer), suggested Bret. I was like "damn you…ur so right!!!". Ross produced Bret's latest writing effort The Canyons, so that was how that connection came to fruition. After a week, Bret saw the latest cut & jumped on board! *sigh of relief from me of course*

VS: This video is based on repetitions of the same actions, which I can image called for many additional repetitions during the production. How complex was the shoot?

SK: Very complex. The continuity was painfully painful to the point that I may have contemplated suicide. We still didn't nail it 100%, but I'm mostly happy with it as it serves the purpose. Having to remember exact placement of a body hitting the water, the orientation of a bottle as it smashes on somebodies head, and even which ass cheek was squinting upon being startled was not the most sane process. We were never perfect, but it all needed to be accounted for so the piece retained its objective nature throughout. Not having a script supervisor meant that I had to really keep an eye on the continuity & the performances, while I had to trust the crew to do their respective jobs. And they did with flying colors! (GO TEAM)

VS. Was the ending always as you have it, or did you get trapped in a sort of paradox where you devised the video as a puzzle and then realized that there might not be one answer? Is there an answer?

SK: It was designed as a puzzle. I actually got the idea when somebody told me: "Hey man, I love your work…I'm always not sure If my interpretation is right though, but awesome!!!" I was kind go sad by this as I took it as "your shit isn't clear mother fucker!" - haha. So, it weaseled its way into the writing as a "what do YOU think happened, viewer?" We originally had 4 answers, but we found it too be a bit too confusing, so we decided to compartmentalize them into A) Guys fault, B) Girl's fault, C) We are wrong, you tell us.

SK: Sad. Can't lie about that one. I hope he/she gets hit in the head with a break-away Champagne bottle (it's break away…it won't hurt). In all honesty, that's mainly why I like making projects like this because its kind of a "Hey! ur only gonna enjoy this if you participate."

PS: If u look closely at the bottle in the slow motion shot, they say Gotham on it. That's right, they are from Dark Knight Rises (left over break-aways) ^_^

watch Placebo "Too Many Friends" via videostatic,com 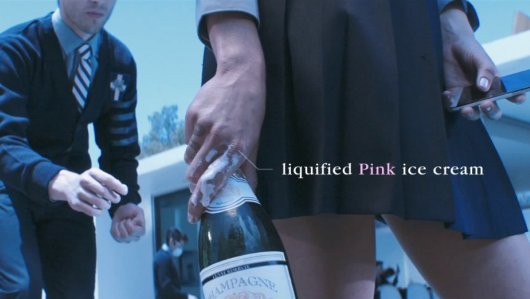 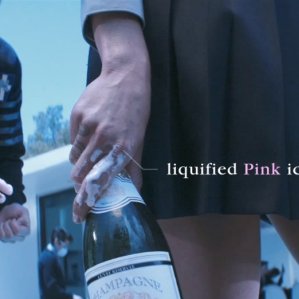