"I decided that I want to have a work that connects me more with the public, that concentrates … on the interaction between me and the audience.

I want to have a simple table, installed in the center of the atrium, with two chairs on the sides. I will sit on one chair and a square of light from the ceiling will separate me from the public.

Anyone will be free to sit on the other side of the table, on the second chair, staying as long as he/she wants, being fully and uniquely part of the Performance.

I think this work [will] draw a line of continuity in my career."

- Marina Abramovic, artist [in a letter to her curator about her 2010 MoMA show The Artist Is Present]

How do you make the inverse of a black box studio — a bare, pure white art gallery — interesting?

First, you fill it with interesting people of all ages, punctuated by actors, writers, artists, musicians and other professional performers. Some famous, some unknown.

Next, you find the angles. The cameras get embedded with the people, getting close and mobile, offering perspectives that keep you off-kilter, yet also in the moment.

You also break the structure of the traditional music video. It's presented as a happening that gets documented with the behind-the-scenes and underlying context as important as the performance itself, which would normally be all you see in a video.

Lastly, you get Jay Z. And you let him loose within those confines. He raps live. He interacts with the people around him, which changes the song and the tone. And you see that the audience around Jay — which, again, includes a lot of "important" people — begins to perform as much for Jay as he performs for them. And what might come across as a boastful expression of material id on record, takes on a different, more communal vibe here.

And you see it's not elitist bullshit, but actually slyly rebellious. The performer and audience seem to be on equal footing here, but that would be disregarding fact that the A-List of the NYC art and intellectual world basically lined up like tourists to get close to the biggest rap star in the world and maybe even catch his attention. 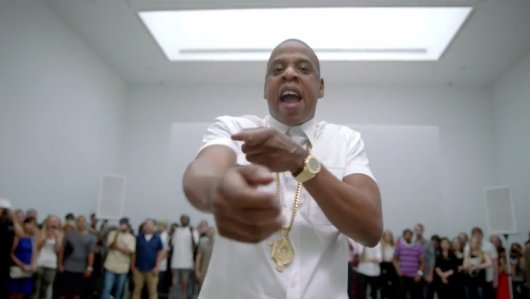 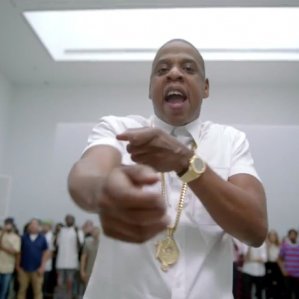